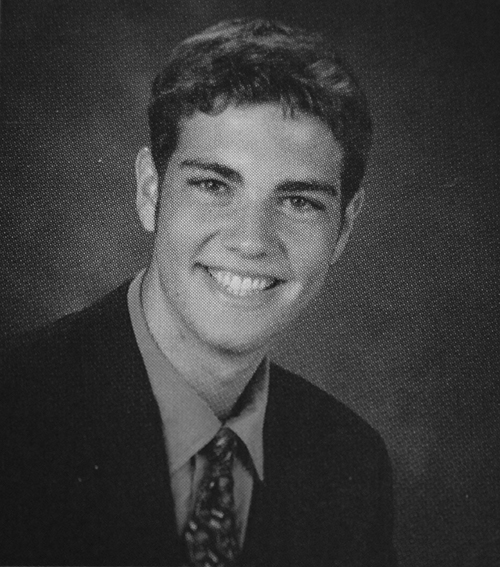 The youngest of 4 siblings, Tim began his educational journey at Hillside Elementary and advanced to Wisconsin Hills Middle School and Brookfield Central. He was involved in a number of activities at Central, including: National Honor Society, Central Fine Arts Alliance, Vocal Jazz, Chamber Choir, State Honors Vocal Jazz, Student Council, Tennis, musicals and plays, and somehow managed to find time to be a board member for the Students Against Dangerous Decisions in 2002-03 and President of Drama Club in 2003.

"I continue to appreciate the tremendous support and encouragement I get from the teachers at Elmbrook," reflected Hughes. "The solid academic foundation Elmbrook has provided me with has helped instill a hard work ethic in me." Tim noted that Tina Glander, Tommy Lueck, Sabrina Hintz, Jason Gillette, and Alice Rast, among others taught him valuable lessons, motivated and support him beyond normal expectations of teachers. "I can't thank them enough," Hughes added. "I have specific experiences with each of them that have greatly affected who and where I am today."

In 2003, Tim graduated from Brookfield Central and continued onto New York University's Tisch School of the Arts where he majored in Drama with a minor in African American studies. In 2007, Hughes graduated with a Bachelors in Fine Arts.

Following NYU, Tim has been able to work consistently as an actor, performing at many regional theaters across the country as well as touring the country in shows. In 2012, Tim made his Broadway debut in Chaplin: The Musical as a member of the ensemble. "Getting to act for a living is a constant celebration," Tim said. "I love the artistry involved in creating a character and telling a story. My favorite part is collaborating with a community of brilliant and inspiring individuals."

Today, Tim is a proud uncle and volunteers his time to work with charities such as Broadway Cares / Equity Fights AIDS. On December 20th, Hughes will make his big-screen debut as The Strongman in the Hugh Jackman-led movie musical, The Greatest Showman! He is also preparing to play the role of Pabbie in Disney's Frozen on Broadway, which opens in New York City on March 22, 2018.

There are no news posts to display