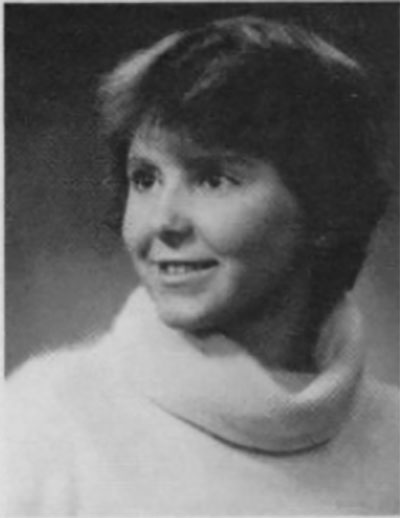 1979 Spartan graduate Jill Kokta has given back to Elmbrook with her tireless work ethic and notable spunk for 43 years and in June 2021 she will retire from her position as Senior Communications Coordinator. Jill's Elmbrook journey spanned 55 years from Kindergarten to present and she has left her mark on the District in countless ways.

Kokta began her Elmbrook journey at Brookside Elementary before attending Woodside, Burleigh Junior High, and finally Brookfield East. During her time at East, Kokta was involved in Choir, and Drama and Principal's Cabinet. During the summer after she turned 14, Jill was hired by then Business Manager Don Siegfried and began in the Business Office typing budget, and in high school she participated in the work study program at the Central Administrative Office then located on North Avenue.

Following graduation, Jill began working full time in Accounts Payable before transitioning to the position of Graphic Designer in the Print Shop and eventually Print Shop Manager. In 1982, she married her partner-in-crime, Greg Kokta and together they raised three daughters, Erin, Kenzie and Devon who all graduated from Brookfield East and have gone on to achieve impressive accolades in both their college and professional careers.

Outside of Elmbrook, Jill also worked as Manager of Hartter's Bakery where she managed their presence at every Milwaukee-area festival. Through the years, her designs & publications like the Annual Report received various accolades. Then in 2012, Jill took over the position of Communications Coordinator where she made the role her own and transformed the department. Among her numerous accomplishments, in 2017 she captained the massive website redesign, and in 2018 she gave Elmbrook a facelift by implementing the District rebrand with a logo and 'become what's next' tagline that she helped craft.

"Looking back, I've really had an incredible and transformative career, but what I'm most proud of are the amazing friendships with colleagues I've made along the way and the unmatched talent of our Communications team that I've been honored to work in. It has been humbling to be a part of a district that puts students first each and every day." reflected Kokta.

Her Elmbrook career spanned 6 decades and only accumulated a total 55 miles on the speedometer from her daily commute from home to the office. In 2021, she will be awarded the Alumni Excellence Award as part of the 6th Annual Engaged in Excellence Awards event.

Today, Jill lives in Brookfield and is looking forward to spending her retirement watching her husband tend to his plants while she relaxes in a lawn chair on her deck surrounded by all of her favorite people. Jill will be dearly missed by her Elmbrook teammates, colleagues, and community members alike. We all thank her for her service to Elmbrook and we wish her the best as she becomes what's next.